(Originally posted on www.glennlewisphotography.com on April 13, 2015)

The cherry blossoms first began to bloom on Jeju on something like the 25th of March. The next weekend, March 28th and 29th, held Jeju's annual Cherry Blossom Festival. I went to this festival, but didn't bother to bring any camera gear, because in my experience, festivals in Korea are much more about buying trinkets, drinking soju (a clear, Korean rice-wine), and eating street food in tents than about whatever the title of the festival in question happens to be. The Cherry Blossom Festival. The Fire Festival. The Barley Festival. The Flower Festival. Any one of them could easily be renamed "The Drinking Soju and Eating Street Food in Tents Festival." This is by no means meant to be an insult. I love the Drinking Soju and Eating Street Food in Tents Festival! From this point forward, I'll shorten the name down to the D.S.E.S.F.T. Festival.

Several of my friends went to the D.S.E.S.F.T. Festival on Saturday, March 28th, in the early afternoon. I wasn't able to join them until a few hours later, at something like 5 P.M., which gave my friends a bit of a head start on me in regards to liver destruction. I took the bus into town and walked up the hill to the stadium complex around which the Festival was taking place. I was in no way surprised to find my comrades a few minutes later, in, where? You guessed it! A festival-style tent, drinking Korean liquor and eating street food. I promptly joined them and set off towards my goal of having an absolutely miserable Sunday.

After about an hour of playing catch-up, we paid for our food and drinks, and began our trek around the stadium. The stadium in question isn't particularly large, but it is a full-size soccer stadium, and it would probably take 10 minutes to circumnavigate at normal walking speed. Normal walking speed, however, is not something that would have been possible to achieve, even if it were desired, due to the huge number of people – certainly in the thousands – milling about.

I was looking for a new pair of sunglasses, because the only pairs I have are Elvis-style sunglasses, complete with glued-on fake sideburns. The D.S.E.S.F.T. Festival, and in fact all Korean D.S.E.S.F.T. Festivals, are great places to waste money on stupid gimmicky things one certainly doesn't need, and by the time we'd made one full lap of the stadium, I found myself in possession of one pair of admittedly pretty-sweet sunglasses, and four baller-ass pimp rings. Some friends I was with ended up with a toy sword that lights up and makes annoying noises and a matching balloon. Basically, we were super-mature.

We spent maybe half an hour watching some live music and dance performances on a fairly large stage before wandering back to the tent in which I'd originally found my friends. Another couple hours there, and a night in town left me sunglassesless, and with only three rings. That's pretty much why I didn't take my camera out.


But back to Cherry Blossoms. On the weekend of the D.S.E.S.F.T. Festival, the cherry blossoms weren't quite at their peak bloom, yet. It took another couple days for them to come out, completely. And then, in typical fashion, a typhoon moved in and tore all the petals off the trees less than a week after they first bloomed. But not before I went back to the stadium and adjacent stream upon which the D.S.E.S.F.T. Festival was held, and took a few pictures. Check 'em out. 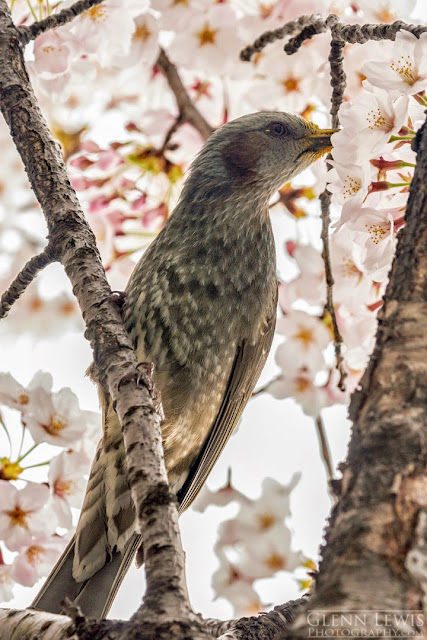 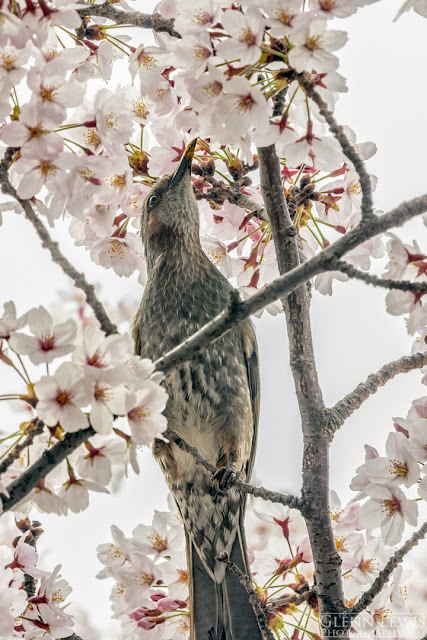 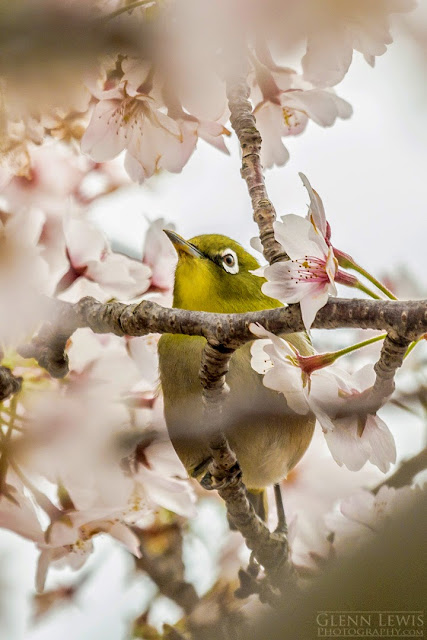 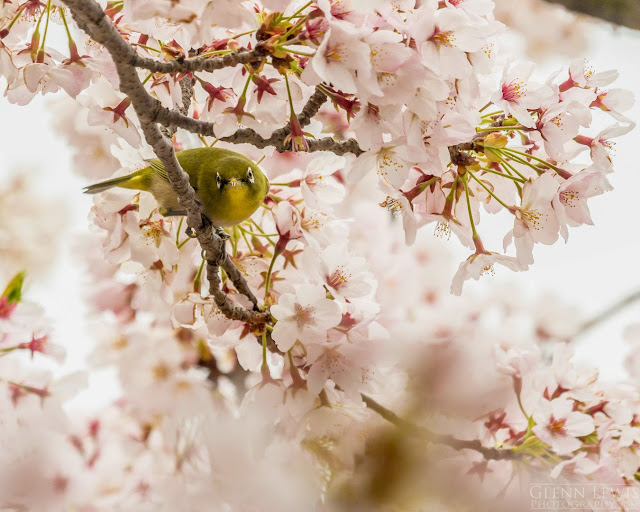 Also, on the first through third of April, I brought my camera and telephoto lens to the schools I work at, because both of my schools have several cherry blossom trees in their courtyards. I don't know if it would fly in America for anyone to walk around an elementary school with a fairly paparazzi-looking telephoto lens, but here, not an issue. I actually managed to get some great shots of a brown-eared bulbul, and a chestnut-flanked white eye.

The cherry blossoms are now gone from Jeju, now, and I will be, too, in the terrifyingly close future. And it's very possible that I've now attended my final D.S.E.S.F.T. Festival. That sucks. Oh well. New adventures and new festivals await!
Posted by MFGB! at 1:44 AM No comments:

(Originally posted on www.glennlewisphotography.com on March 31, 2015)

NOTE: If you hate reading, just scroll to the bottom and check out the slideshow.

In less than a month, I'll have left the South Korean island of Jeju, my home for the last two and a half years. I've been working hard to save money during my time here, and for the most part, I've succeeded in putting away something of a nest egg that I'll probably burn through much more quickly than I presently care to admit. But because I haven't really acquired much in the way of physical goods since arriving on Jeju, I felt like I could splurge on one particular item that I've had some interest in for a while. A macro lens. After doing some research, I decided to go with the Canon EF 100mm f/2.8L Macro IS USM and the Canon MR-14EX II Macro Ring Lite. Although it was meant to be a Christmas present to myself, it didn't actually arrive on Jeju until March, but whatever. Now is the time of year that it's actually usable, now that the local flowers are finally blooming. Here's how that whole setup looks on my Canon 60D.


I'm admittedly quite clueless about macro photography – this is obviously something I'll need to remedy in the near future – but here's the jist of it. Macro photography is basically the taking of pictures of things from very close range. If you've ever seen a picture of a flower in which you can identify individual specks of pollen, it's probably a macro shot. Same thing if you've ever seen a picture of an insect in which you could clearly make out the compound eyes.

Since I got the lens, I've gone out on several occasions to play around with it. Here are some of the better shots I've gotten:


As I'm writing this, the cherry blossoms on Jeju are in full-bloom. So I'm going to try and give myself a couple opportunities to shoot them in the next week or so. They don't typically last more than a week, and with all the rain that's predicted in the near future, they might only last another couple days. Maybe I'll have some kind of follow-up to this in a future post.
Posted by MFGB! at 10:46 PM No comments:

I Joined A Motorcycle Gang

Originally consisting of the three founding members, myself – Glenn “MFGB” Lewis, Jordan “Yup” Yip, and Luke “Kingslayer” Armstrong, our mission has been to ride our badass hogs around our island home of Jeju, South Korea, turn some heads, and raise hell.


Wait, that isn't true. Our actual mission statement is: “We ride together. We die together. Bad Boys for Life.” But it might look more gangster if it's written: “We ryde together. We dye together. Bad Boyz 4 Lyfe.” It's “gangster” to spell things incorrectly, isn't it? Specifically, 'i' should be replaced with 'y' whenever possible, in order to show just how gangster we really are. Of course, changing 'die' to 'dye' might cause some confusion, and fools who don't know no better might read this motto and think we're some kind of group for the advancement of illiterate fans of the dying of clothes. I don't know where we'll ultimately land on that one.

Wait, that isn't true, either. Our actual actual mission has to do with the objective of riding around and exploring Jeju when the weather is agreeable, exploring weird and / or abandoned places, and taking funny pictures of ourselves in and around these places.

This being primarily a photography website, here are some photos of a few places we've been:


And one more SaDoMDaC (It's pronounced "Saddam Dack") photo classic, again from the Jeoji Artist Village.  This shot is actually a nearly 360-degree panorama.